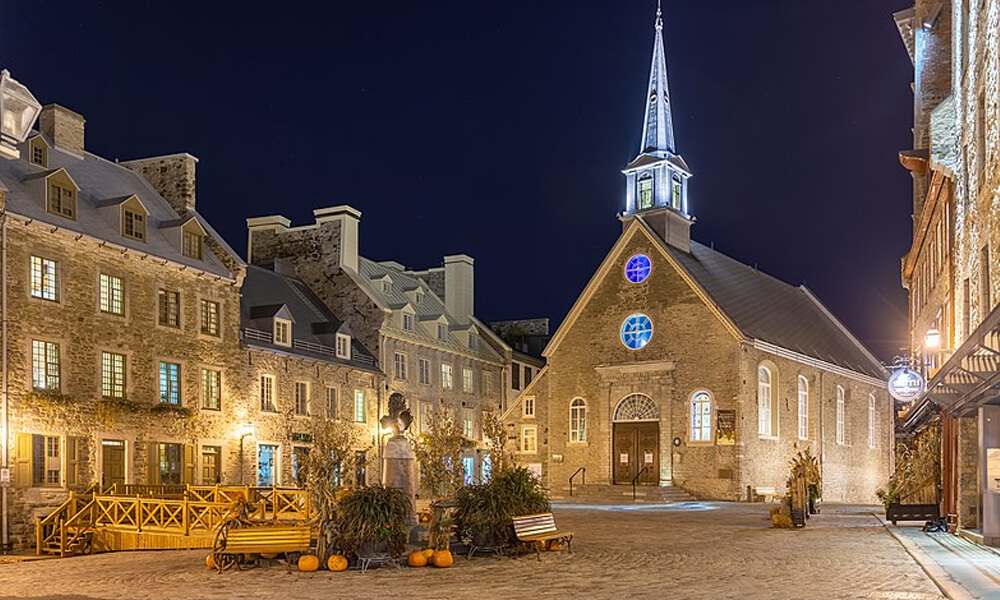 Here is an introduction to Quebec City History when you visit Quebec. As you walk from upper to lower town from Montmorency Park, take Côte de la Montagne. This was the first road to provide access between Upper and Lower Town. In 1623 Champlain ordered construction of “un petit chemin pour y monter la montagne avec facilité”. (A small road to climb the mountain with ease).

As you walk down the Hill on your left you’ll see a large cross, marking the site of the first cemetery in Québec. Men from Champlain’s original expedition of 1608 are buried here and it was used as a cemetery until 1687. Just opposite the grounds are the Breakneak (casse-cou) Stairs. Follow them down to Sous-le-Fort Street. They were named because it’s directly beneath the site of the old Fort St. Louis, atop the cliffs. When the stairs were first constructed settlers used to drive cattle and sheep on them. It was so until barred from doing so by decree of the Sovereign Council.

Left at Sous-Le-Fort, left at Notre Dame will bring you to the little square known as Place Royale. Find a good spot, perhaps climbing onto a balcony or stairs to address the group.

It was at Place Royale, on the very spot now occupied by the church of Notre Dame des Victoires (Our Lady of Victories). It’s here the first settlement was established by Samuel de Champlain, in 1608. The original ‘Habitation’ comprised 3 buildings. The buildings were surrounded by a wooden palisade and a moat which could only be crossed by a drawbridge.

The first summer of 1608 was spent constructing the Habitation. All those who were not spending the winter departed for France on September 18. The only Europeans to spend the winter of 1608 in North America were a small band of Englishmen at Jamestown, Virginia and the 28 Frenchmen of Québec. Only eight of the 28 lasted that winter. They’d been afraid of an Indian attack but it was disease that did them in many of the men succumbed to scurvy, caused by a deficiency of Vitamin C. The cold was unlike anything they’d imagined in France. The length of the winter and the isolation drove a few of the men mad and their garbled screaming could be heard by all the others.

The settlement was only a few years old when a traitor nearly destroyed it. Jean Duval, a locksmith, had a plan to somehow eliminate Champlain. His goal to hand control of the settlement over to the Basque fishermen because they needed it to control the rich fishing grounds in the Gulf of St. Lawrence. The Basques would pay well for a betrayal.

Duval was greedy enough to cheat one of his fellow conspirators. During a game of cards and the man, in a rage, told Champlain’s officers all he knew of Duval’s plot. The conspirators were quickly arrested, except for Duval. His head was cut off, then stuck on a spike and displayed atop the Palisade – a warning to traitors.

During the ‘ancien regime’, Place Royale served the same function as did public squares in hundreds of towns throughout France. At the time it is a marketplace, where people from the country could bring Fresh vegetables and fruits, baskets of blueberries. Also clay jugs of honey and cream, pots of maple syrup to sell people of the town. people When new laws were passed by the Governor, or new decrees issued from the King in France, these are read publicly to the folks assembled in the square.

The place is also the site where public punishment is handed out. Criminals tied to posts are whipped, the severity of the whipping depending on the nature of post and the crime.

As well, many of the most stringent laws in Québec during the ‘ancien regime’ had to do with fire. Fire is especially dreaded at the time. Because, in a town where many of the buildings are built of wood and closely packed together. In the winter fire was a special danger because of the hot chimneys and the fact that river ice made it difficult to get enough water to douse the flames. From 1676 to 1759 anyone caught smoking in the streets of Québec could be subject to pillorying.

The original bust of Louis XIV is placed in the square by the Intendant Champigny in 1686. A fire raged through the square in 1713 and the bust is destroyed. The present bronze bust is a copy of the original. It was a gift from the people of France to the people of Québec in 1928.

The houses around Place Royale, in the days of the ancien regime, would have been occupied by gentilhommes – merchants and government officials. – Social distinctions in New France were rigid. Only Gentilhommes wore wigs, that were carefully curled and powdered. Other men tied their hair back in pigtails, known as “queu” (tail). Gentilhommes wore silk stockings and buckled shoes. Others – peasants, artisans wore leggings made of homespun or leather, and either wooden shoes or moccasins adapted from Indian designs.

Traditionally Upper Town was the administrative and religious center New France, Place Royale and the surrounding Lower Town were the hub of economic activity. Wealthy merchants built houses in the place, close by the docks and warehouses of the region.

This is just a small piece of Quebec City history when you visit Quebec. Make sure to book your hotel here or contact us if you have any questions.