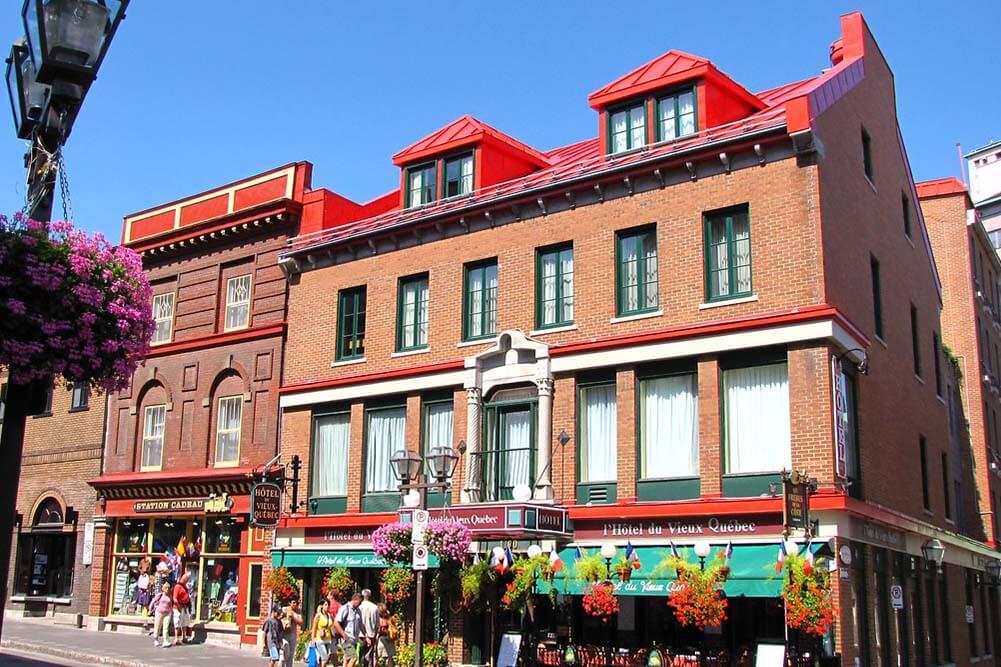 There are a number of unique and interesting hotel options within and just outside the Walled City. The best choice may depend in part on your budget.   However, with one or two exceptions, the choice of where to stay in Quebec City comes down to a choice of style and location rather than price. Because most of the legacy hotels’ rates fall within a fairly narrow price range. And so with this information let’s explore the different neighborhoods.

Thus, you can find the best Quebec City Hotels in these “neighborhoods” or quartiers:

Within the Old City (Old Quebec) there are two distinct neighborhoods; (1) Lower Town(or Basse Ville), and (2) the Walled City, Upper Town, also known as the Upper City (or Haute Ville). Connected to each other by an outdoor elevator we know as the funiculaire.  The (3) Parliament Hill neighborhood is just outside the walled city. And the fourth “neighborhood” is simply the Quebec City (4) suburbs surrounding Quebec City proper.

The Lower City neighborhood spreads out across from the Port of Quebec, along the St. Lawrence riverfront. It’s easily recognizable. Centuries-old buildings (dating to the 1600s), and narrow, cobblestoned streets is the Quartier Petit Champlain  lend to its character. It is a quaint restaurant and shopping district said to be the oldest street in North America.

The Walled City neighborhood, sometimes also called the Upper City, starts at the Terrasse Dufferin boardwalk beside the world-famous Chateau Frontenac. Three hundred (300) feet above the river, and incorporates the Latin Quarter which extends from the Chateau, past City Hall, out rue St-Jean and then to the St-Jean Gate. 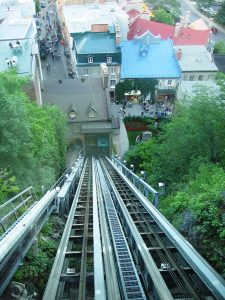 Parliament Hill is a third neighborhood which includes picturesque Place d’Youville. Place d”Youville is just outside the wall at the St-Jean Gate at the bottom of the Hill. Then there is the Citadelle, where the colorful changing of the Guard takes place in the summer. It spans past the Parliament complex (the Assemblée Nationale), to the Grande Allée, the Champs Elysée of North America.

The suburbs, are not strictly a “neighborhood”, per se, encompass a large area adjacent to and surrounding Quebec City proper. Generally to the north and west, including, notably, the suburb of St-Foy. Ste-Foy is a pleasant, five-mile ride from the Chateau Frontenac, straight west on Laurier Boulevard. Past the Plains of Abraham is the Lebourgneuf neighborhood in the borough of Les Rivières where Les Galeries de la Capitale is located.  About six miles northwest of the city, both noted here for a choice of comparatively inexpensive and family-friendly hotel options.

Every visitor will want to spend at least some time each of Quebec City’s distinctly different neighborhood districts;  the Lower City, the Walled City, and Parliament Hill.  The following is a brief discussion of the best hotel options by in each district (see navigation at the bottom of this section).  Remember, the city is eminently walkable, and visitors can sleep in any of the three neighborhoods and walk easily to the other two.

The Lower City is along the edge of the St. Lawrence River, below the boardwalk and the Chateau Frontenac (pictured above).  It is the oldest part of Quebec, well known for its French Colonial architecture, cobblestoned streets and ancient stone buildings, many dating to the 1600s.  The principal attraction in the Lower City (Basse Ville) is the Quartier Petit Champlain, an area of narrow streets lined with stores and charming casual and fine dining restaurants, all housed in restored, centuries-old heritage buildings.  The Lower City is compact and easily walkable, from end to end, in a matter of minutes. 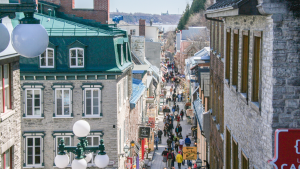 The best hotel option in the lower City would be the Auberge St. Antoine on rue Dalhousie, directly across the street from the Museum of Civilization (Musée de la Civilisation).  This property the best boutique hotel in the Province, and arguably in all of North America.

Highly recommended restaurant options include Chez Muffy in the Auberge St. Antoine (one of three genuinely spectacular restaurants in the City), the casual le Cochon Dinge with entrances on rue Petit-Champlain and Boulevard Champlain, and the Parisian-style Café du Monde, Quebec City’s only riverfront restaurant.

The Walled City (also known as the Upper City) is perhaps the best known, or at least most photographed part of the City, and incorporates two somewhat distinct sections, Place d’Armes and the Latin Quartier (the Quartier Latin).

Place d’Armes is the epicenter of Quebec, 300 feet above the St. Lawrence River, stretching from the boardwalk outside the Chateau Frontenac, across Place d’Armes, down the rue du Tresor, to beautiful Notre Dame de Quebec Cathedral, to City Hall, where the Place d’Armes district ending at City Hall, where the Latin Quarter begins.  The Chateau Frontenac dominates the landscape here. The locations of virtually everything in Quebec is expressed in distance from the Chateau.

The best hotel option in the Place d’Armes neighborhood would be the Chateau Frontenac of course.  The historic, but now completely renovated Hotel Clarendon is about a one-minute stroll from Place d’Armes and the boardwalk and the funiculaire to the Quartier Petit Champlain in the Lower City. 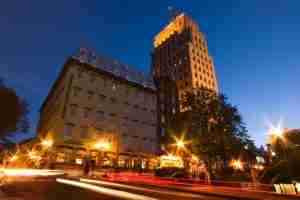 Highly recommended restaurant options include the Champlain Restaurant, within the Chateau itself, for fine dining, or for a casual lunch, the Chic Shack would be a very good choice for a gourmet burger or Poutine (a dish that was invented, refined and perfected in Quebec City, of course, and now well known throughout North America).

The Latin Quarter extends from City Hall along rue St. John to the St. John Gate.  Like other “Latin Quarters” around the globe, this neighborhood is a  colorful and popular gathering place for students young people in general. Its typically lined with inexpensive shops, cafés, and trendy restaurants.   The Quartier Latin’s principal attraction is the spectacularly restored Monastere des Augustine, just steps down a narrow, age-old street from rue St. John.  A secondary attraction that should not be missed, is Notre Dame de Quebec Cathedral which occupies a corner across the square from City Hall, at the top of rue St. Jean, more or less in a buffer zone where the Latin Quarter and the Place d’Armes neighborhoods overlap.

The best hotel options in the Latin Quarter would be the Monastere des Augustine which is both a spectacularly restore, wellness-themed hotel and a museum, and the moderately priced, nicely renovated Hotel du Vieux Quebec, located on rue St-Jean at the very center of the Latin Quarter.

Quebec’s Second Empire style Provincial Parliament building, the Assemblée Nationale,  stands just outside the Walled City. Opposite the St-Jean and St-Louis gates, and anchors the Parliament Hill neighborhood encompassing historic Place d’Youville. Of course it includes the Parliament Hill proper, as well as the Grande Allée (the Champs Elysée of Quebec).  No less than four of the City’s more contemporary legacy hotels reside here.

Place d’Youville is a picturesque square just outside the St. John Gate (one of three entrances into the Walled City and the Latin Quarter), perhaps best known for its expansive ice-skating rink in the winter.

As well, Parliament Hill itself, between Place d’Youville and the Grande Allée, is the site the Winter Carnival ice and snow sculpturing competitions and the Ice Castle itself that is constructed every year, between the St. John and St. Louis Gates, directly across the street from the main Parliament building.

The Grande Allée is a block-long section of Laurier Boulevard lined with literally thousands of seats in sidewalk cafes on both sides of the street. This makes it quite popular with locals and visitors alike from May to October.

It is hard to pick a winner among the Quebec Hilton and Delta Marriott across the street from Parliament, and the Chateau Laurier and the Hotel Le Concorde, the east and west anchors of the Grande Allée respectively, and the Hotel Palace Royale or the Marriott Quebec Downtown.

The Hotel le Concorde and the Quebec Hilton offer guests the best views.  Most rooms at the Hotel le Concorde have views of the walled city or the Plains of Abraham.  Some rooms at the Quebec Hilton have spectacular views of the old City.  Most of the four are more or less comparably priced, though the Delta Marriott is likely the least expensive.

The Hotel le Capitole, a few steps from la Porte St-Louis and the Latin Quarter, overlooks festive Place d’Youville, and is very nice hotel option, especially between Christmas and about mid-March when the skating rink is open.

Here are some highly recommended restaurant options near Parliament Hill. Apart from the sidewalk cafés from late spring until early autumn. They include the Restaurant Ciel, one of the three must-see fine dining establishments.  Visit Quebec recommends this revolving roof-top restaurant as a first-night option. And not just because the restaurant operator is one of the best in the City, but also because the 360-degree views (one revolution every 90 minutes) provide a wonderful way to get oriented at the beginning of your visit.

For families or couples on a budget, there is no reason not to stay in a suburban location and drive into the city. Parking is easy in each of the four principal neighborhoods, and visitors will spend some time in each.  Ultimately, it will be a question of how much time you have.

We recommend two hotels in particular, in two distinctly suburban location in the suburb of St-Foy. Only a five-mile drive along Laurier Boulevard, all the way through the St. Louis gate to the Chateau Frontenac without a single turn.  And then our second suburban recommendation is at the Galeries de la Capitale, especially for families with younger children.

The Best Quebec City Hotels in the Suburbs

Firstly, the best hotel options in St. Foy is the small, moderately priced, clean and safe Hotel l’Aristocrate. Located on a side street just off Laurier Boulevard, from which, you can point the car east and arrive at the Chateau Frontenac and Place d’Armes in about ten minutes.

Secondly, the best hotel option at Les Galeries de la Capitale is the moderately priced, all-suites Quality Suites. It is a  roomy and affordable option for families.

Above all a highly recommended attraction in these two neighborhoods, is the well regarded Quebec Aquarium in St. Foy. And, of course, ‘Les Galeries de la Capital’ is a Quebec City mall with its indoor roller coaster, Ferris Wheel and large skating rink. For families staying at the Quality Suites located at the edge of the Galeries’ parking lot.

These are our best choices of Quebec City hotels by neighborhood.