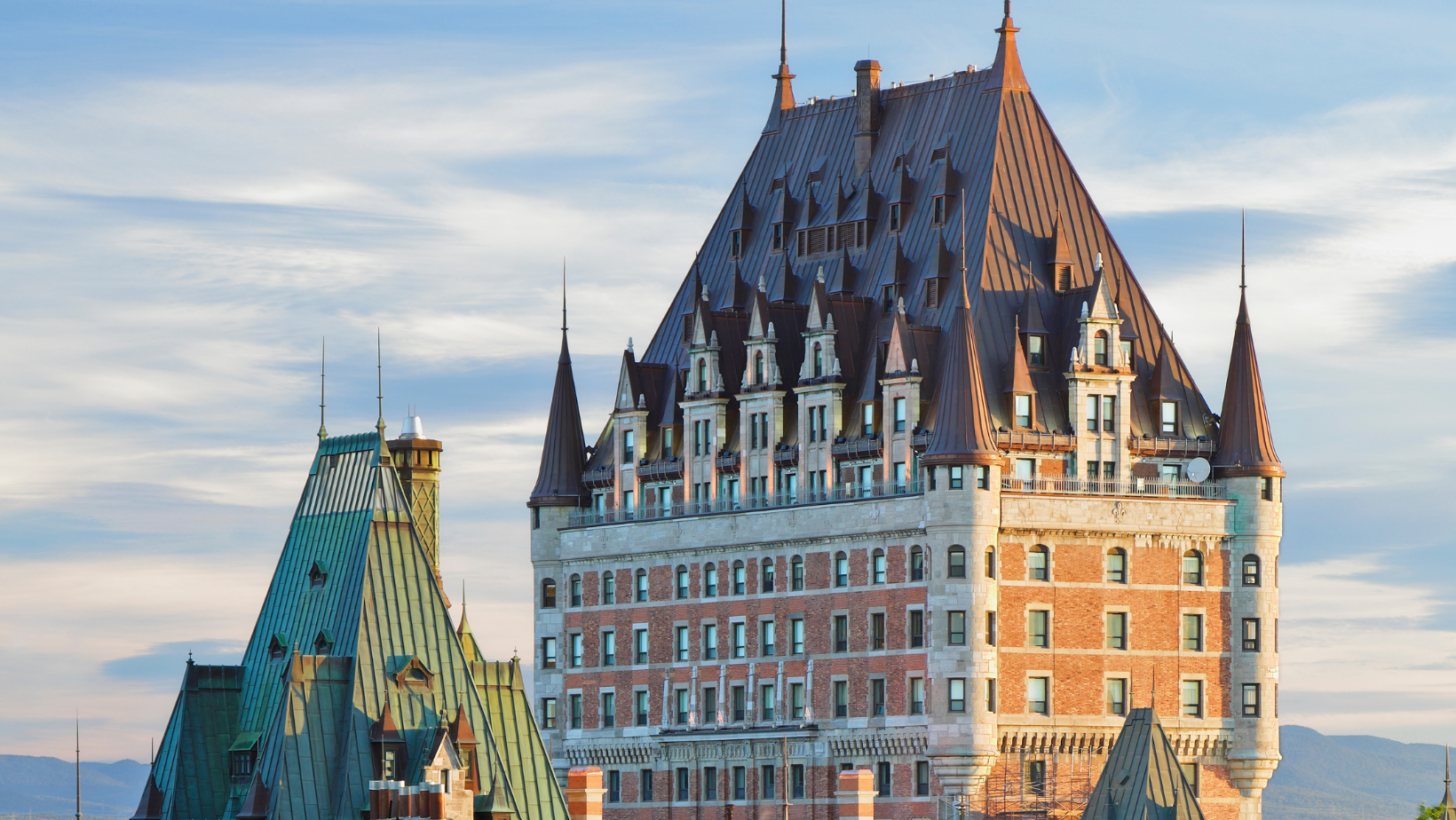 Stay at the Chateau Frontenac When You Visit Quebec

This majestic property is located at Kilometre Zero, in the very heart of Quebec City. The hotel sits atop Cap Diamant on the Promenade des Gouverneurs boardwalk. The view of the St. Lawrence River 300 feet below is commanding.

History of the Chateau Frontenac

Named for Quebec’s first colonial governor, Louis de Buade de Frontenac. He was asked in 1690 to surrender the besieged City to the attacking American General Phipps. From his perch atop Cap Diamant. Near the present location of the hotel, Frontenac uttered the immortal words;  “You’ll have the answer from the mouth of my cannons”.  (Phipps armada left in defeat, losing perhaps 1000 men to disease and storms en route back to Massachusetts.) This victory would be part of the name of the chapel in lower-town. Notre-Dame de la Victoire.

Developed as one of the original Canadian Pacific Railway hotels. It is designed by American architect, Bruce Price, in the “Chateau Style”. He went on to emulate when designing other iconic hotels and railroad stations. The Windsor Station in Montreal and the Banff Springs hotel in Alberta are good examples.

Host to kings and queens, presidents and prime ministers over the years, the hotel.

Hosted the Quebec Conferences between Winston Churchill, Franklin Roosevelt and Canadian Prime Minister William Lyon Mackenzie King. They met there twice during World War II, in 1943 and 1944 to discuss plans for the invasion of Europe.  Prime Minister Brian Mulroney hosted U.S. President Ronald Reagan at the Chateau at what became known as the Shamrock Summit in 1985.

This historic/unforgettable property is a perfect venue for a honeymoon or just a romantic couples weekend. Make it part of a family vacation. Or make it part of a conference where spouses will have more than enough to inspire them during their free time.

Firstly, Quebec City, the only walled city in North America, is a walking city. The Chateau is right at the epicenter of everything walkable. Secondly, this makes for a summertime visit to this iconic hotel nothing less than lovely.

Above all make an autumn visit equally memorable. The turning leaves on the maple trees in the City and surrounding countryside  The spring, beginning around mid-May, café owners put their tables and chairs back out on the sidewalks. The atmosphere is just festive as summer is around the corner.

But in winter, when the fires are roaring in the fireplaces, the snow is piled up to the windowsills. In the 400-year-old stone buildings below the Chateau in the Lower City, an exhilarating nighttime slide is a must. The world-famous toboggan slide is on the boardwalk above the St. Lawrence River, is just steps away, and can be just unforgettable.

All of Canada is friendly, and Quebec City, the Provincial Capital, is no less so.  French-Canadians (Quebecois) are a famously affable and notably funny race.    And, you will not need to speak or understand French here.  Everyone at the Chateau Frontenac, literally everyone, and virtually everyone employed in the tourism industry will speak fluent English. And these are just some of the reasons to consider staying at the Chateau.

How to Get There

If you’re driving to Quebec we suggest driving along the South Shore of the St.Lawrence River. One of the best ways to arrive at the Chateau (or elsewhere in the Old City) is to take Autoroute 20. There you will drive to the south shore community of Levis. Then follow the signs to the Levis ferry terminal, and take the every-30-minute-ferry to Quebec City.  The magnificent hotel will grow larger and larger as you cross the river.. Eventually towering over you as you land at the bottom of the Cap Diamant, at the foot of the hotel. If you’re bringing your children on a family trip, they’ll insist on starting the trip home on the ferry,  the rides across the river will be a family memory for years to come.  (Be sure to keep your best camera handy for some keepsake family photos.)

Moreover, the hotel, its public areas, conference facilities, food and beverage venues and most guest rooms have been extensively renovated over the years. Most recently in 1993 and again in 2011.

Breakfasts are served in the newly renovated Place Dufferin restaurant.  Stop at 1608 bar for artisanal cheeses and a glass of wine before dinner.  The dining room overlooks the Terrasse Dufferin boardwalk. Enjoy the majestic view up the river past the Isle of Orleans, and all the way to Mont Ste-Anne. It is without rival in for cuisine and ambiance in the Province of Quebec.  (Editor’s pick: the quality of some of its Inniskillin wines from the neighboring province of Ontario, might surprise you).

In conclusion, this is why we rank Fairmont’s le Chateau Frontenac as one of the top hotels in Canada, and indeed all of North America.

Our Rating for The Chateau Frontenac

Location, our 5 of 5 reflects the Chateau’s central location in the city, with historic graystone buildings, restaurants, and attractions spread out in a sphere radiating from the Chateau.  The most walkable location, for Upper and Lower City restaurants and attractions anywhere in the City; it’s literally steps to the funiculaire (outdoor elevator to the lower city in summer) and to the toboggan slide and skating rink in winter. Front he chateau your are a short walk to the Latin Quarter, and to the winter carnival sites in winter, and to the historic Citadelle where you and your family can watch the changing of the guard beginning in June each summer.

For Service, our 5 of 5 reflects a long tradition of friendly, helpful service by staff proud to be there, and endemic in this province.

Value, our 5 of 5 speaks volumes about a comparatively expensive hotel, though a bargain relative to comparable accommodations in North America.

Cachet, our 5 of 5 says if it had enough cachet for Winston Churchill and Franklin Roosevelt and William Lyon Mackenzie King to plan the invasion of Europe at the end of World War II, it should be a six!