Where to Stay in Quebec City 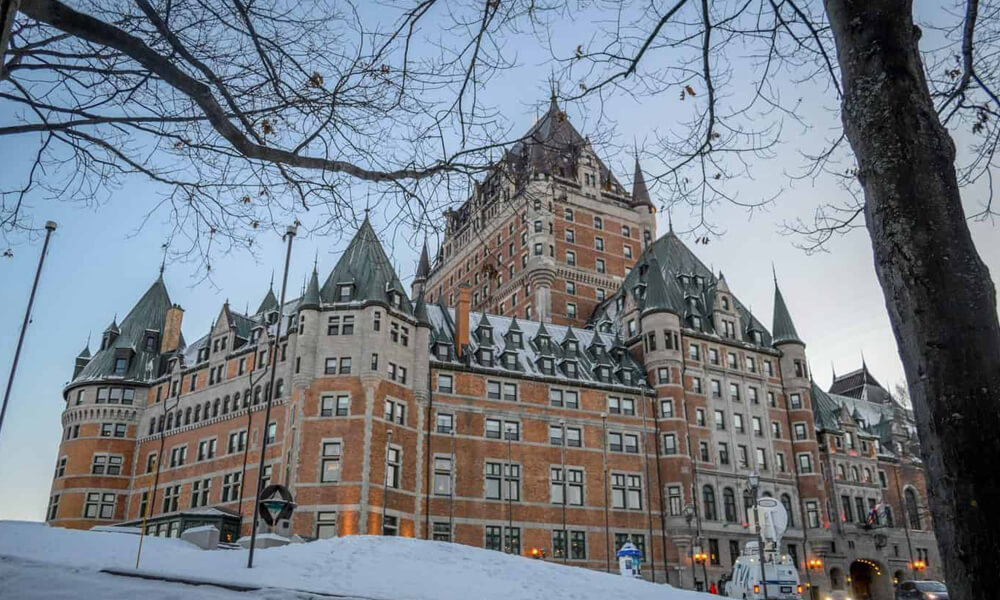 Where to Stay in Quebec City

There are no bad choices among Quebec’s many hotels. Whether large or small the choice of Quebec City Hotels, and in particular, the hotel location, will determine the character of your visit. The following is Visit Quebec’s summary of a few of the major hotel options. So if you’re asking “where to stay in Quebec City?” Here is a list of some of our favorites.

Quebec City Hotels Inside the Wall 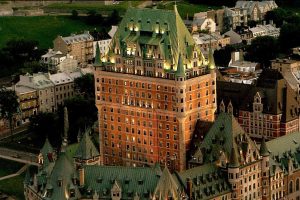 Many visitors prefer to stay inside the wall in one of the hotels in Old Quebec. And for those visitors the historic Fairmont Chateau Frontenac is, of course, the obvious first choice. And quite rightly so, it’s a solid choice for its elegance, cachet and location.

The Chateau (at right) is the most photographed hotel in the world. It is one of the original Canadian Pacific hotels designed by the Chateau style invented by the legendary architect Bruce Price.  It opens its doors in 1893. Subsequently, a great deal of what most visitors would want to see in Quebec City radiates out from the Chateau. The city is easily walkable from the hotel’s picturesque interior courtyard.

Indeed, it is just steps from the front door to the Promenade des Gouverneurs (the boardwalk)and Dufferin Terrace. This incredible walkway is perched 300 feet above the Saint Lawrence River. In winter it is  home to the world famous toboggan slide from December to mid-March.

As well, it is an easy, colorful walk, steeped in history, to exceptional French and French-Canadian restaurants. There is also the funiculaire. Quebec City’s outdoor elevator that connects the Upper and historic Lower cities. You can find it literally a few steps away on the boardwalk immediately outside the hotel.  Regular visitors learn to walk down to the lower city, where the ancient graystone buildings date to the early 1600s, and take the funiculaire back. That definitely makes it a pro tip.

Because of its strategic location atop Cap Diamant, the Promontory of Quebec, many of its lavishly appointed guestrooms offer panoramic views of the St Lawrence River below. You can see the Isle of Orleans and the Laurentian Mountains beyond. But the views of the old city from the west side of the hotel are what many hotel guests visit Quebec to experience.

Quebec City’s best restaurant may be inside the Chateau itself.

The historic Hotel Clarendon is a second, large, full-service hotel option. Only a stone’s throw across Place d’Armes and a short block past the picturesque Church of the Holy Trinity down rue Sainte-Anne from the Chateau Frontenac.  As its proximity to the Chateau would suggest, its location across is no less strategic than that of the Chateau itself. The four-star, 144-room Hotel Clarendon opened in 1870, and though it is the oldest hotel in the City (it was closed and fully renovated in 2019 and 2020).  It’s comfortably furnished guestrooms have an agreeably contemporary look and feel.

The hotel is located directly across the street from, and shares an underground parking garage. It is accessible from its lower level, with Quebec City’s City Hall.   It is also about a one-minute walk from rue St-Jean and Quebec’s colorful Latin Quarter, and some of Quebec City’s trendiest restaurants.  And, right around the corner, another one-minute walk away is beautiful Notre Dame de Quebec Cathedral and the peaceful, interior courtyard of the Seminaire du Quebec.

No Visit to Quebec should end without a visit to Monastère des Augustines, both a wellness retreat and museum, beautifully restored by the municipal, provincial and federal governments at a cost of hundreds of millions of dollars.  The Monastère was the home of the Augustine nuns who established a system of health care, two centuries ago, that became the template for Canada’s widely admired public healthcare system, and it is also a short walk through the Quartier Latin from the Clarendon.

The full-service Hotel Clarion has a respected and locally popular restaurant, and offers a 24-hour front desk, free wifi, and room service.

Visit Quebec rates the Clarendon a 22 on a scale of 25:

This absolutely unforgettable, wellness-focused hotel and museum with a thousand artifacts displayed. It is steeped in the history of 17th century Canada, and unique in the world. What became the first hospital in North America  was founded in 1639 by three young nuns from France. They arrived to care for the indigenous peoples of Quebec.

Eventually, Le Monastere establishes an order of cloistered Augustinian nuns. Then structure a health-care system that became a public healthcare paradigm for North America and the world.

Hotel guests have the option of staying in small, but elegant, monastic cells. The rooms range from simple, antique furniture and shared baths, or in larger, traditional hotel rooms with private baths.

Lunch and dinner are served in an onsite restaurant. But like the cloistered sisters who lived here several centuries ago, complimentary buffet breakfasts here are taken in silence. Of course this takes place in a historic breakfast hall deep in the heart of the building. And some hotel guests actually opt to spend their entire stays in silence.

Hotel guests and museum visitors can tour of the monastery and handle some of the 1,000 items on display from a collection of 4,000 authentic medical artifacts. They can learn about the evolution of medical practices in North America over the last few centuries.

There is free wifi throughout the facility, but in the spirit of quiet contemplation and wellness there are no televisions.

Visit Quebec rates le Monastere des Augustines a 27 on a scale of 25: 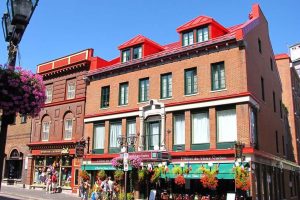 Rue St-Jean, the spine of Quebec City’s colorful Quartier Latin is lined with dozens of retail stores, galleries and some of Quebec City’s trendiest restaurants, including Les Trois Garcons, and the Restaurant d’Orsay, two of Visit Quebec’s favorites.  The Latin Quarter is a destination unto itself.

The hotel is right around the corner from the stunning Monastère des Augustines, and a short walk out la Porte St-Jean to the large ice skating rink at picturesque Place d’Youville, a gathering place for ice-skaters young and old from December to mid-March.

This Hotel du Vieux Quebec is consistently rated by guests as one of the top Quebec City hotels.

Visit Quebec rates the Hotel du Vieux Quebec a 22 of 25:

In, this historic ed hotel is surrounded by cobblestone streets and ancient stone buildings housing cafes, restaurants, galleries and boutiques. Over the past few years, much time and care has been spent in renovating Hotel du Vieux-Quebec. Rooftop gardens, breakfast baskets* hung on your door, relaxing lounge with computers, library, games and fireplace all contribute to the renowned charm and character which has earned this hotel such great reviews. Hotel du Vieux-Quebec provides the type of authentic Quebec experience that can only be found in an independent hotel. Adding to its appeal, the hotel is an officially recognized and award winning leader in the environmental movement. Parking is conveniently available across the street. All rooms are accessible by an elevator. *Breakfast is included with direct bookings to the hotel only.