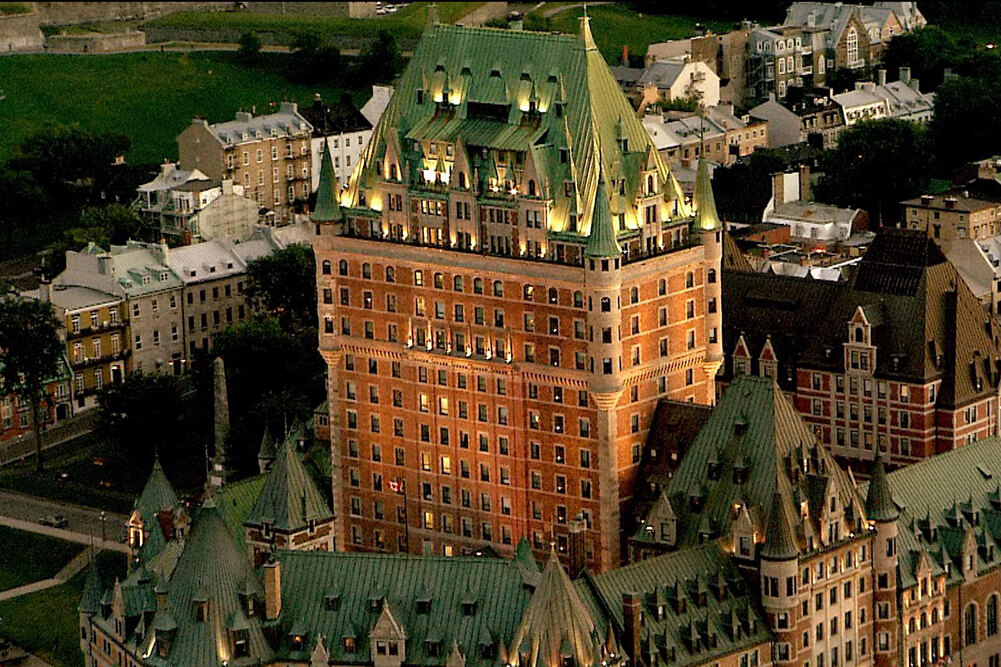 The historic Fairmont le Chateau Frontenac, a destination unto itself, is said to be the most photographed hotel in the world, and is one of Canada’s most celebrated national landmarks.  Indeed, it is not easy to take a photograph in Quebec City without the Chateau Frontenac in the foreground or the background.  To many of its regular guests, a weekend at the Chateau is as much a visit to the famous hotel as it is a visit to Quebec City itself.

This majestic property is located at Kilometre Zero, in the very heart of Quebec City, atop Cap Diamant on the Promenade des Gouverneurs boardwalk, with a commanding view of the St. Lawrence River 300 feet below.

Fort St-Louis to the Chateau Frontenac

Named for Quebec’s first colonial governor, Louis de Buade de Frontenac who, when asked in 1690 to surrender the besieged City to the attacking American General Phipps from his perch atop Cap Diamant near the present location of the hotel, uttered the immortal words, “You’ll have the answer from the mouth of my cannons”.  (Phipps armada left in defeat, losing perhaps 1000 men to disease and storms en route back to Massachusetts.)

Host to kings and queens, presidents and prime ministers over the years, the hotel.

Hosted the Quebec Conferences between Winston Churchill, Franklin Roosevelt and Canadian Prime Minister William Lyon Mackenzie King, who met there twice during World War II, in 1943 and 1944 to discuss plans for the invasion of Europe.  Prime Minister Brian Mulroney hosted U.S. President Ronald Reagan at the Chateau at what became known as the Shamrock Summit in 1985.

This historic/unforgettable property is a perfect venue for a honeymoon, a romantic couples weekend, a family vacation or a conference where spouses will have more than enough to inspire them while the conference participants are busy with the official events.

Quebec City, the only walled city in North America, is a walking city, and the Chateau is right at the epicenter of everything walkable, which makes a summertime visit to this iconic hotel nothing less than lovely.

As well, the turning leaves on the maple trees in the City and surrounding countryside make an autumn visit equally memorable, and in the spring, beginning around mid-May, café owners put their tables and chairs back out on the sidewalks, and the atmosphere is just festive.

But in winter, when the fires are roaring in the fireplaces, and snow is piled up to the windowsills in the 400-year-old stone buildings below the Chateau in the Lower City, an exhilarating nighttime slide on the world-famous toboggan slide is on the boardwalk above the St. Lawrence River, is just steps away, and can be just unforgettable.

All of Canada is friendly, and Quebec City, the Provincial Capital, is no less so.  French-Canadians (Quebecois) are a famously affable and notably funny race.    And, you will not need to speak or understand French here.  Everyone at the Chateau Frontenac, literally everyone, and virtually everyone employed in the tourism industry will speak fluent English.

Developed as one of the original Canadian Pacific Railway hotels.

Designed by American architect, Bruce Price, in the “Chateau Style” which he went on to emulate when designing other iconic hotels and railroad stations including Windsor Station in Montreal and the Banff Springs hotel in Alberta.

How to Get There

If you’re driving to Quebec along the South Shore of the St. Lawrence River, one of the best ways to arrive at the Chateau (or elsewhere in the Old City) is to take Autoroute 20 to the south shore community of Levis, then follow the signs to the Levis ferry terminal, and take the every-30-minute-ferry to Quebec City.  The magnificent hotel will grow larger and larger as you cross the river, eventually towering over you as you land at the bottom of the Cap Diamant, at the foot of the hotel, and if you’re bringing your children on a family trip, they’ll insist on starting the trip home on the ferry,  the rides across the river will be a family memory for years to come.  (Be sure to keep your best camera handy for some keepsake family photos.)

The hotel, its public areas, conference facilities, food and beverage venues and most guest rooms have been extensively renovated over the years, most recently in 1993 and again in 2011.

Breakfasts are served in the newly renovated Place Dufferin restaurant.  Stop at 1608 bar for artisanal cheeses and a glass of wine before dinner at the adjacent Champlain dining room (where reservations will be required).  The dining room overlooks the Terrasse Dufferin boardwalk, with a majestic view up the river past the Isle of Orleans, and all the way to Mont Ste-Anne, and is without rival in for cuisine and ambiance in the Province of Quebec.  (Editor’s pick: the quality of some of its Inniskillin wines from the neighboring province of Ontario, might surprise you).

Fairmont.  The Chateau’s entry-level rooms are undoubtedly as deluxe as any hotel rooms in the City.  All of the hotel’s standard rooms have been beautifully restored, comfortably furnished and tastefully decorated.  Standard rooms are in the Fairmont category.

Deluxe.  Our favorite rooms are on the backside of the hotel with views of the merchant ships en route to and from Montreal, navigating up and down the St. Lawrence River, 300 feet below.  This is especially entertaining during the mid-winter when the Levis Ferries cross through the ice in both directions simultaneously every 30 minutes.   guestrooms overlooking the river are in the Deluxe category.

Signature.  Some of the rooms do indeed incorporate the hotel’s iconic turrets.  Ronald Reagan stayed in one of the turreted suites during the Shamrock Summit with Prime Minister Brian Mulroney in 1985. Turreted rooms are in the Signature category.

Fairmont Gold.  The rooms from the eleventh to seventeenth floors are virtually in a boutique hotel within a boutique hotel.  Guests on these floors are provided with private check-in, concierge services, and complimentary breakfasts, snacks and cocktails throughout the day, and many of these rooms have panoramic views of the City and the river.  Rooms on the Concierge floors are in the Fairmont Gold category.

Book Now
Editor’s Ranking Recommended
We rank Fairmont’s le Chateau Frontenac as one of the top hotels in Canada, and indeed all of North America.
/25